This page is a collection of Jewish mtdna branches. At the moment (januari 2019) the branches are defined by the analysis of 100% ftdna Family Finder Ashkenazi descent. It is expected that this can be increased later by other methodes so we can add Sephardic, Mizrahi and other Jewish heritages.

The method follows the method of Jeff Wexler (2018). Due to the strong endogamy of Ashkenazi, 100% Ashkenazi descendants have a large amount of matches, and many matches are above 100 cM. Characteristics: 18000 matches in default settings of ftdna Family Finder and a distribution as shown. As a comparison a diagram is given for a 100% Dutch person (Brabant) called Wim. 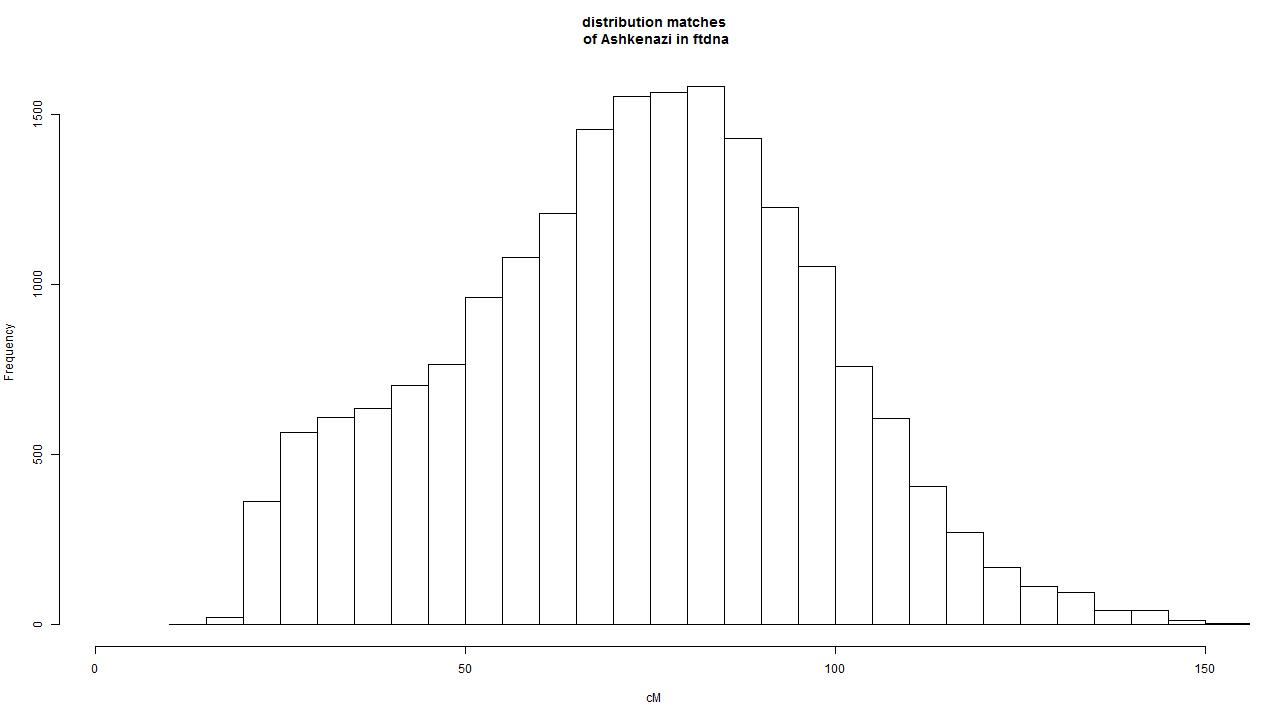 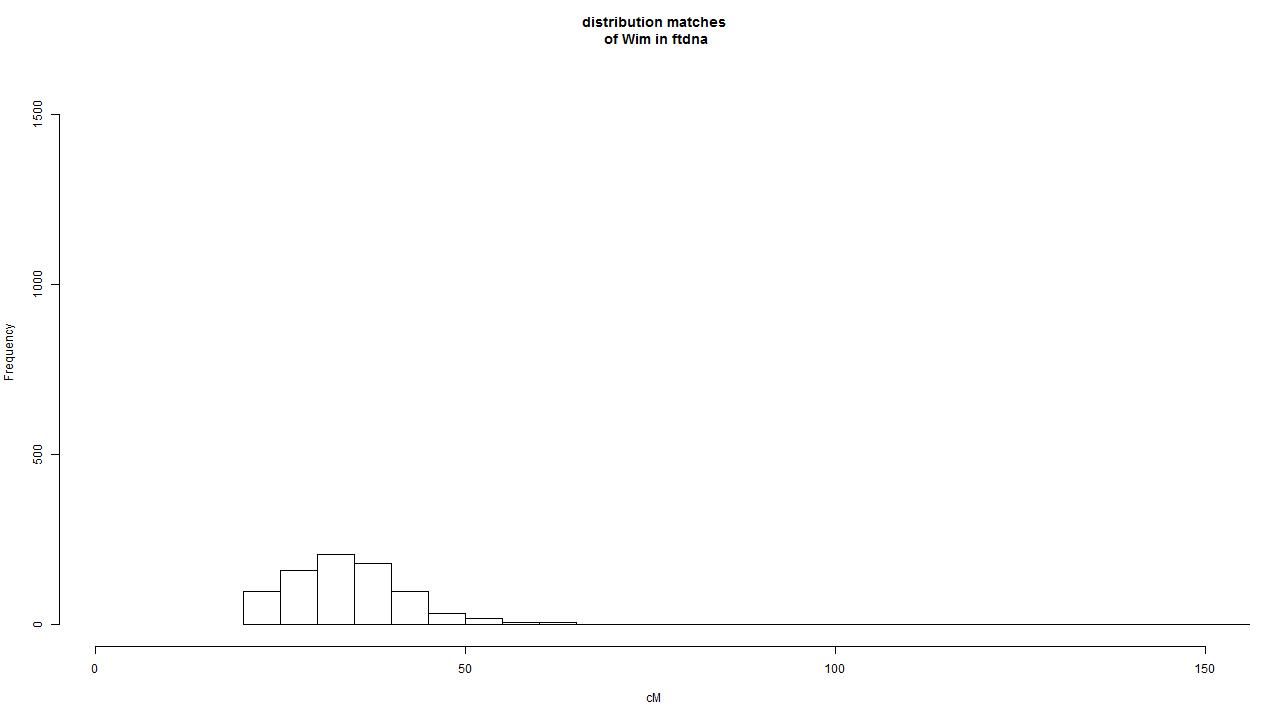 Additional the public results of the mtDNA phylogenetic tree of ftdna was used to determine the number of people that were measured by ftdna. This was determined as the sum of the people in the first 15 countries. Since I don't have the Unknown country, I miss 32%, which is the average of the complete sample. In the extreme case of a large branch (e.g. 1212 persons in H1) I miss 10% in the countries that are outside the first 15 countries. This does not change the pattern that I find.

mtdna is relatively small and the number of mutations in a given timeperiod is small. The average time for a mutation is about 1/16.569*2.5*10^-8 which is about 2400 years. This means that I will have four types of Jewish mtdna branchs:

The first challenge I face is the difference between mtdna phylogenetic tree from the individual measurements (mtfullsequence in ftdna) and the defined phylogenetic tree of www.phylotree.org of Mannis van Oven. The measurements in ftdna give many more subbranches than the tree of phylotree.org. For the Jewish branches with six or more persons I looked for a person in that branch and registered the mutations and the number of matches at distance 0. This enabled me in most cases to define the SNP(s) of the Jewish branch, and report it in this mtdna table. Examples are MB-185, MB-098, MB-089, MB-091 and MB-051.

In 2021 a few branches were added manually. They were found in non-Ashkenazi Jews. The same approach was used: the autosomal matches were analyzed and the largest characteristic mtDNA groups were collected. The next step is the inspection of the group; if a group has the characterics of a branch (significant in the group, hardly any non-Jews within the group) they were added in the list. Since the statistics is much less, only a small number of branches are sufficiently convincing to report. These branches are not used in the analysis below.

Distribution of the branches

In this diagram the almost 200 branches are reported. The diagram can be compared to the Ashkenazi Y-DNA branches in the Data section. The largest branch is far out the largest. About 35 branches represent 75% of the Ashkenazi peoples. 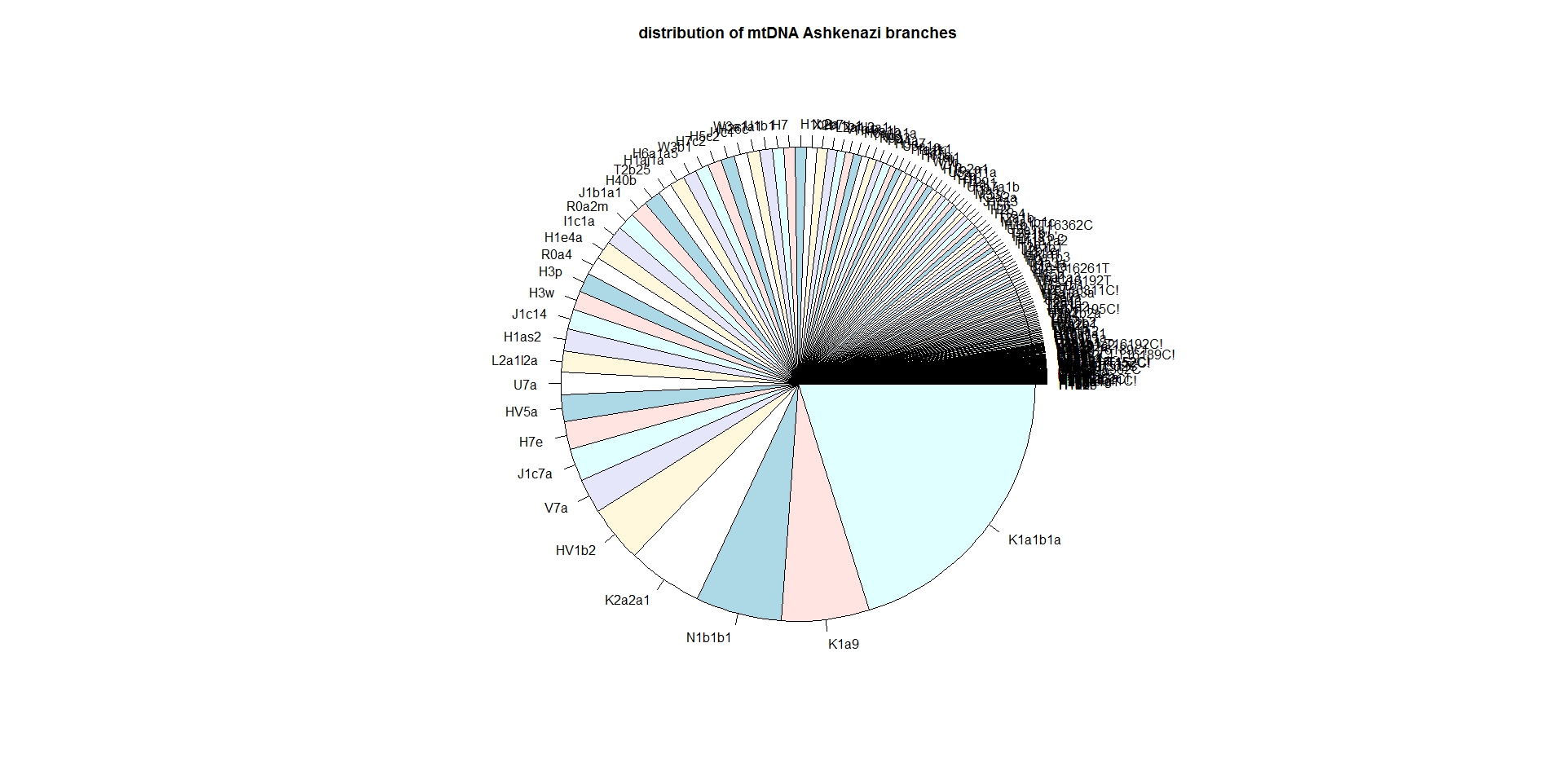 A mtdna haplogroup comparison with countries.

Since the large population growth of Ashkenazi Jews the number of branches give a better distribution over the haplogroups than the number of people. Similar diagrams were made in 2014 of Jewish Y-DNA. The discussion on a possible European origin of Ashkenazi Y-DNA stopped. The diagram showing the different mtDNA haplogroups in different populations was presented by Badro et al. 2013. The distribution of Ashkenazi branches is added so a comparison is possible. 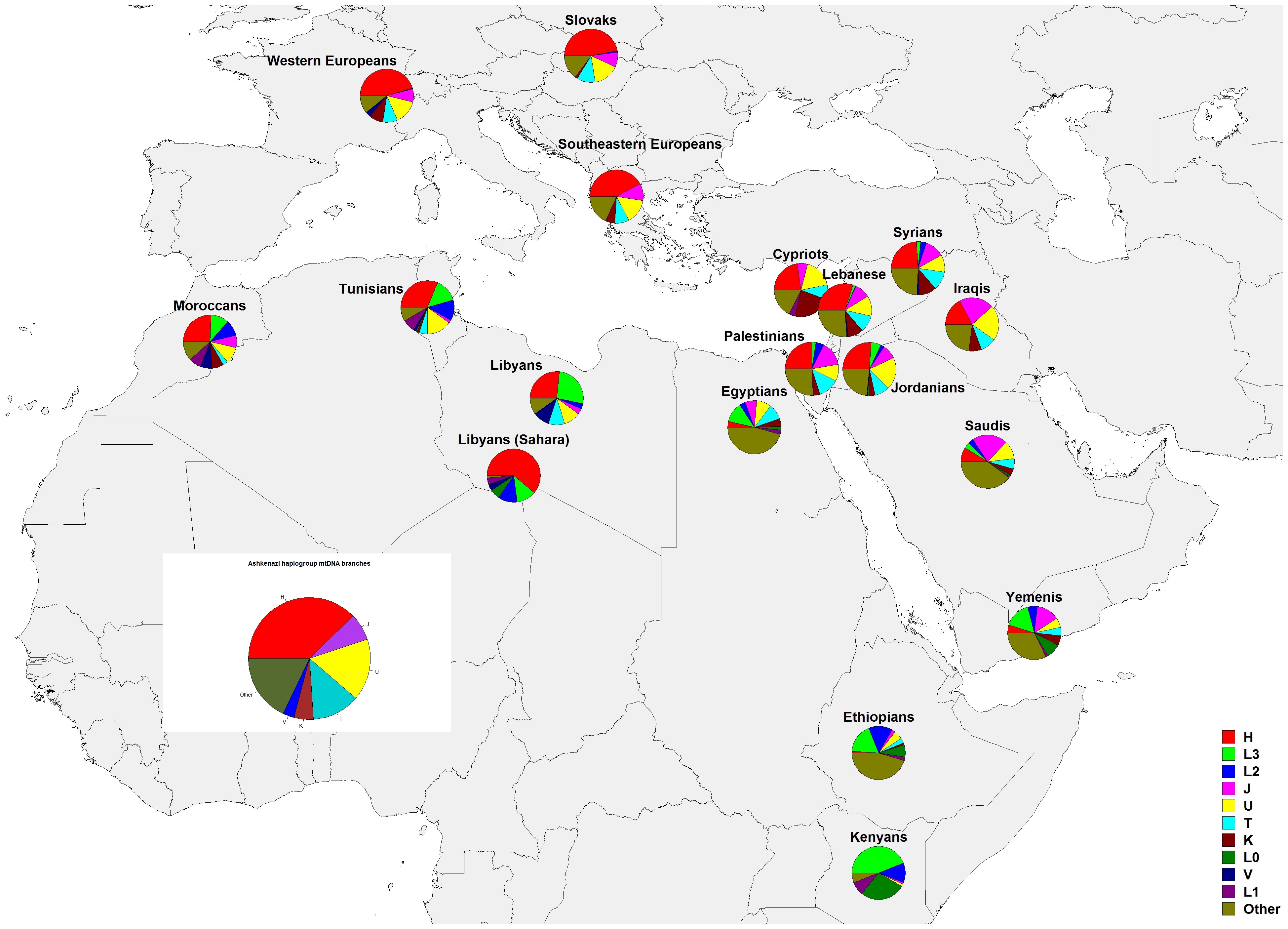 From the collected data i conclude that: This leads to the main conclusions: Earlier data suggests: On a specific branch:

The reference to yfull and ftdna can be interesting. The ftdna data has more samples; the yfull data has from scientific publications and shows subbranches. Notice that the amount of registered samples is the result of a collection of people who were tested. They do not represent a representative collection of data.