The distribution of sizes of branches, ordered by size. 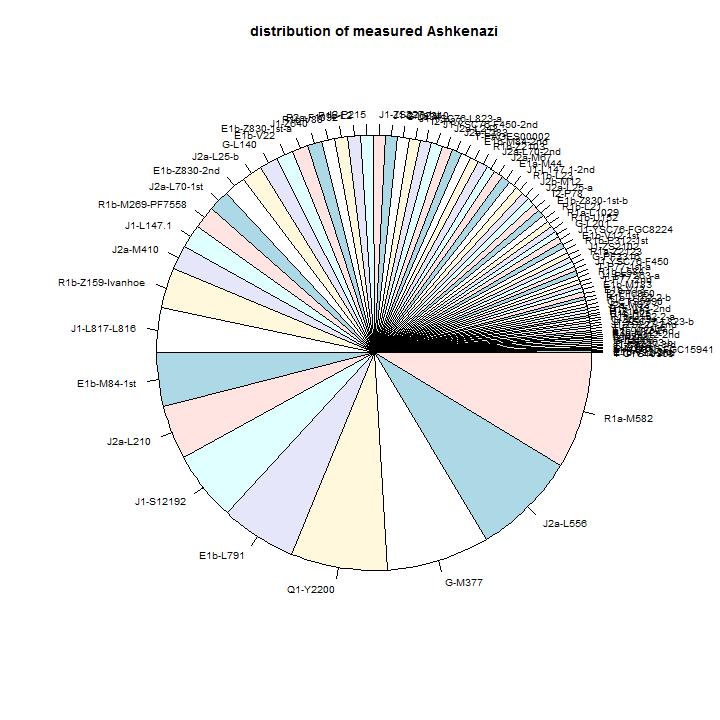 These models describe the Jews arriving in Polish-Lithuanian Europe. To find a realistic model, the models should follow a set of observed characteristics. The most important are:
As a measure of the amount of Jews in recent times we used the values of 700.000 in 1620 (see Demographic history of Poland), 1.000.000 in 1770 (see History of Jews in Poland) and 9.000.000 in 1890 (see Historical Jewish population comparisons)
This simulation routines were previously used for the paper on 2000 years genetic variability in Flanders, Brabant and Limburg.

Model input: This is the (most simple) model to describe the Jews arriving in Polish-Lithuanian Europe (400 people arriving at the same time and constant grow rate in the period until 1620). In this model the distribution of the size of the Ashkenazim does not follow the observed distribution.

Simulation results: In this simulation we have descendants of 84 male line ancestors.

Comparison with observations: In the observations we have 8 male line ancestors that have 50% of the Ashkenazi descendants. The diversity of sizes of the different simulated branches is insufficient. This simulation does not describe the distribution sufficiently. 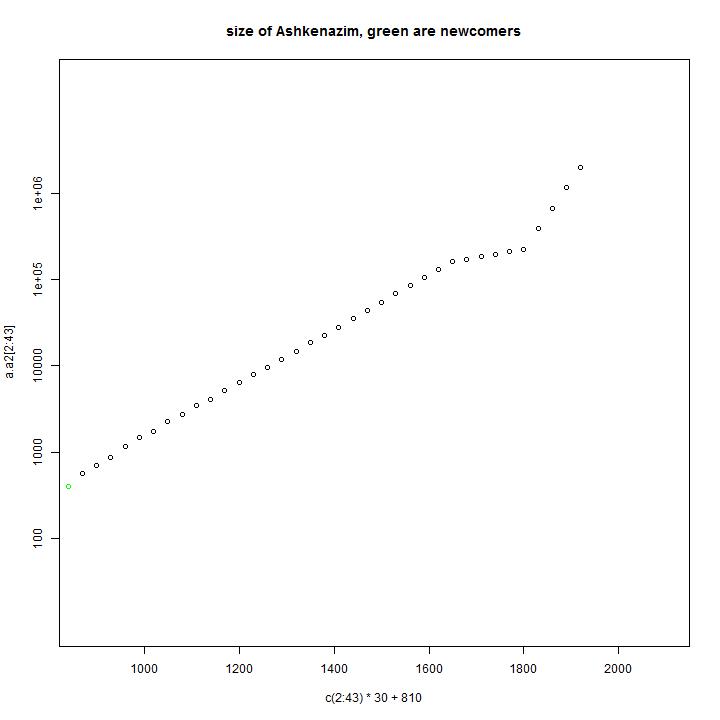 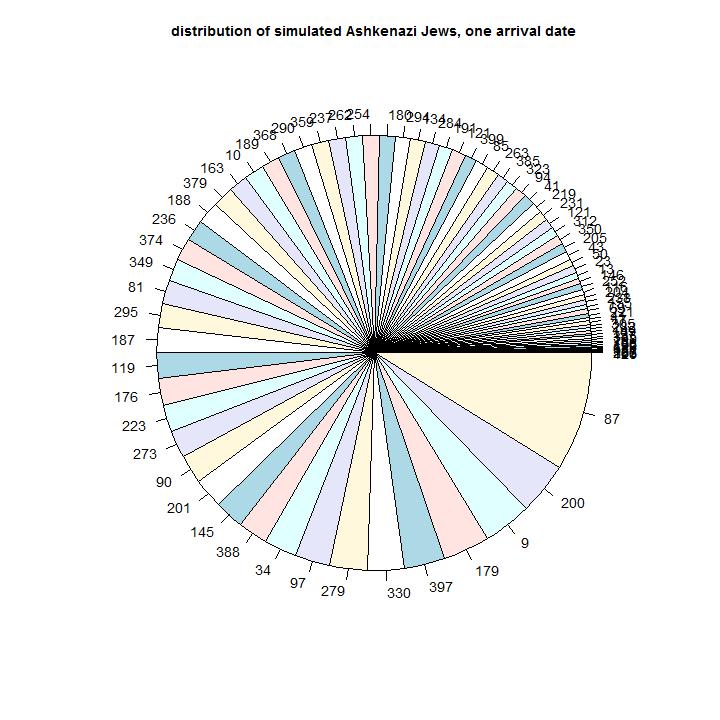 Model input: In this model the the growth rate of the people is not stable, but has periods of no growth and stronger growth.

Simulation results: In this simulation we have descendants of 84 male line ancestors.

Comparison with the observations: In this model the distribution is a little bit better than in the previous model, but the fundamental difference between model and data is still present. 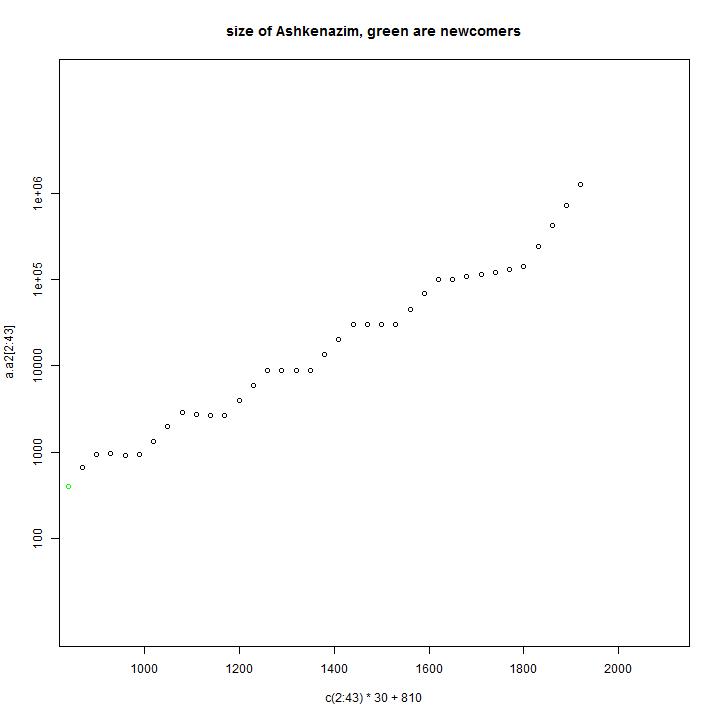 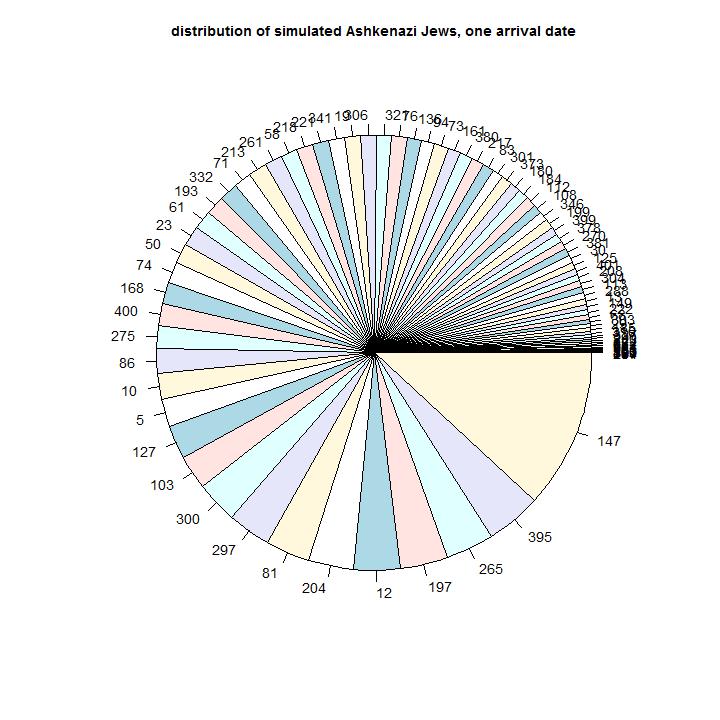 Model input: In this model we use less ancestors to start with and a larger population growth.

Simulation results: The time of initial arrival of the first Ashkenazi Jews is later. The number of branches is less than the number of Ashkenazi branches and the small branches are lacking.

Comparison with the observations: This model does not have the amount of present branches. It does not describe the diversity of the amount and size of the branches.

Model input: In this model the 400 people are arriving over a period of time in the area where the population growth is strong. This can be seen by the green dots in the first diagram.

Simulation results: In this simulation we have descendants of 75 male line ancestors. 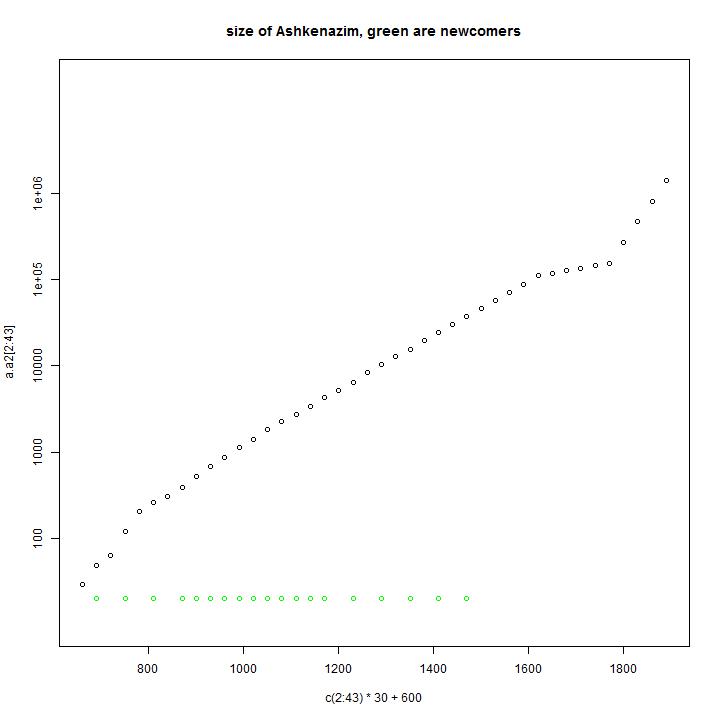 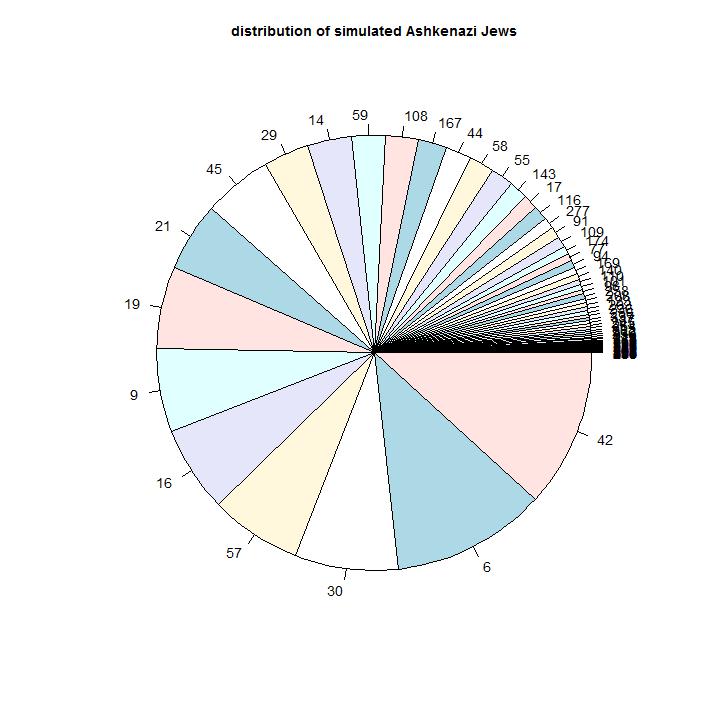 Model input: In this model we assume that we have a difference in status in the community. This might be the case if sons of a elite group in the community have more chance to have descendants.

Simulation results: It is possible to create parameters to realize the distributions. The differences in population growth should be large and the continuation of the differences should last (in the simulated models) about 400 years.

Comparison with the observations: It is possible to make a model to fit the distribution, but the required parameters are unlikely realistic.

General Characteristics of the model

In the simplest model we have a population with a stable population growth over a long period of time. In the document of paper on 2000 years genetic variability in Flanders, Brabant and Limburg it was shown that, as a first approximation, one can use the value of 1.02 for a population growth in the Neolitic period and 1.06 in the period 8000-2000 ybp for the population of R1b in Europe. These two values give the following characteristics of number of parameters:

The model that best describes the distribution of branchsizes is Model 4.

It gives an arrival of Ashkenazi Jews over a long period of time, and an effective population growth that is about 1.25 per generation (using an average generation of 30 years).