Last week i had a look at the Cohen haplotypes and looked if we can deduce something from the origin of the Cohen haplotypes. I had a look to see if we can deduce something from the numbers. I chose to take the people of Cohen page of ftdna. This probably gives a representative impression of the people that call themselves Cohen. I determined from each person that has more than 12 markers to see what distance (using McGee) they have to the modals as i found for the different Ashkenazi groups. For each person i determined to which Ashkenazi group they are closest; in case their distance is more than 1500 years, i disregard the association to a Ashkenazi group.

So i got numbers of Cohen people for each group. I subsequently divided the numbers by the number of Ashkenazim that i found in my collection on my website (for each group). In case Cohen was a noise detection (not related to any group) these ratios should be constant (with some statistical noise). In case all Cohen descended from one person, those group should have equal numbers, and they should have a tmrca less than 3000 ybp.

I omitted the tiny groups (at least 10 in my collection), since the statistical noise is too large. I required that at least persons were found in the ftdna Cohen project. The distribution is shown in the diagram. 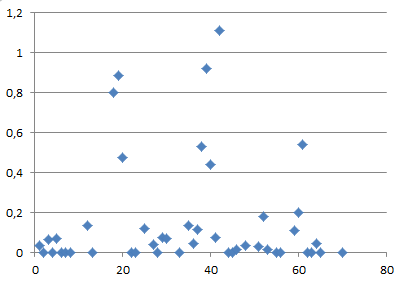 The result is that eight groups had Cohen presence:

All other large groups had low Cohen numbers:

Notice: on the ftdna project page were 92 persons that were not close (as defined above) to any of the Ashkenazim groups. A first impression suggests that they belong to other Jewish groups.

In 2016 i realized that the branch that was indicated as AB-022d is not a Cohen branch. The nine members have no Cohen/Kahn or similar names. These person probably became member of the ftdna Cohen project, because their Y-DNA STR-markers were consistent with the "Cohen modal type". After Thomas et al. reported in 1998 their "Cohen Modal Type" based on 6 STR-markers, many people and organizations used this to conclude that had Cohen DNA. The STR markers of the members of AB-022d have the "Cohen Modal Type" and joined the ftdna Cohen project; they have no proven Cohen ancestry, and should not be used as a Cohen branch.

It is well possible that four out of the five ancestors were in Judea at the start of Judaism (J1-ZS227, J2a-L70, J2a-L25 and J2b-L283). There is no reason why one branch is more likely to be the original Cohen branch than the others. A shared ancestors of these four branches was long before the start of Judaism.

A similar analysis is not possible for the Levi haplotype. The majority of Levi are member of R1a-M582. No ftdna project of the Levi group exists that has members of other haplotypes. Ashkenazi Levite is only for R1a-M582 members. A possible follow-up could be to use Levin at worldfamilies.net.

Addition in 2019: references are made to the new names of the branches. The two branches in L25 (J2a-L25-a and J2a-L25-b) have people who did a NGS test. The shared ancestor probably lived in the land of Judaism and two branches probably left to the Ashkenazi countries. It means that we have five ancestors at the start of Judaism that have Cohen heritage. Four of them could have lived in the land of Israel when Judaism started. AB-022 and AB-047 had branch splits before leaving the last of Israel.